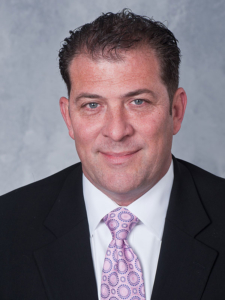 A native of Houston, Texas and a nearly 40-year veteran of the ILA, Robb was also elected in July 2015 by the Executive Board of the South Atlantic and Gulf Coast District, to fill the unexpired term as District President, following the retirement of Clyde Fitzgerald from that position. The District President’s term runs until July 2018.

Robb began his career as an ILA longshoreman in 1979 where he cleaned forklifts as a member of ILA Local 1273. He also worked in maintenance with ILA Local 1330. Locals 1273 and 1330 would merge in 1983, becoming ILA Local 28 and Robb would be elected chairman of that local’s Executive Board in 1984.

Robb’s career with ILA Local 28 would culminate in 2001 with his election as President. In 2001, he also was elected a Vice President and Executive Board member of the South Atlantic and Gulf Coast District, ILA. This District represents ILA members on the Atlantic Coast from North Carolina to Florida and along the Gulf Coast from Florida to Texas.

For the past five, years Robb has served on the board of the ILA’s Civil Rights Committee and locally, in his home port of Houston, he serves as a board member for both Houston’s East End Chamber of Commerce and the Houston Maritime Museum.

Alan Robb comes from a rich maritime history. His father was a Scottish merchant marine who met Alan’s mother aboard a military supply ship transporting military goods to Europe during the Second World War. Alan’s parents emigrated to New York City where his father worked for a steamship agency in New York City beginning in 1946. In 1948, Alan’s father took a job on the Houston waterfront with a local stevedoring company that employed ILA.

Alan Robb and his wife, Barbara are the parents of two daughters, Alex and Sydney and the family resides in League City, Texas.